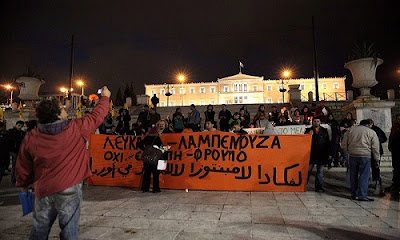 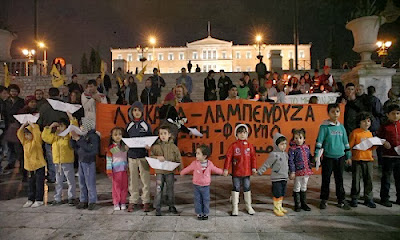 The EPA AEGEAN continues to be open! and takes loud part at the todays parade!

We continue to resist to the closure of ERT and keep alive the voice of society.

The occupation of Radiomegarou after the invasion of the MAT doesnt intimidate,  nor scare us !
The government of Memorandum  wanted to send another autoritarian message to the employees of ERT , and throughout society. On the same time  announced in the most typical way to lenders that they are willing to meet their demands by any means.
A similar scene was set in today's protest march against the invasion of the MAT Radiomegaro, made ​​by employees and people in solidarity to ERT in Mytilini .

The entire police force of Lesvos and Chios from forces mobilized to preserve the "safety " and the smoothness of the events of the anniversary release of Lesvos. To our requests for free information, dignity in life and at work, the government's response once again was to encircle us with the police in front of thousands of our fellow citizens. Obviously to knowledge and  conform !
We reply that the policy of black, law enforcement, intimidation of making poor and misery will not pass .

ERT does not belong to the government. It  is and will be the voice of society struggling .

The EPA AEGEAN continues to be open and to produce daily informative and entertaining program . The station building remains open and then invite everyone to defend public property and public good update.

Employees / s in EPA ISLANDS  we go on !