When they take our fish we have to take our defence! 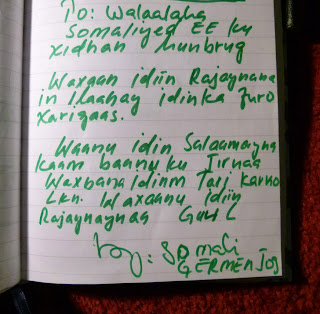 Somali refugees in Germany say their thoughts about the Somalis acused for piraterie:
When they take our fish we have to take our defence!
Good things can come you know , all over the world.
intreview2
Most people think Somalis are bad people but most of them they are not bad ..As god makes your own finger not the same, one is shorter one is longer, people are also like that. One is good, one is bad. You know, maybe they can apologize for what they did and maybe they can feell sorry.
Some say somalian people are thieves, some say we are burglers, some say we are terorists. But we are not what they say.
We dont have any goverment and that is our problem,
But there are some people who are good: those who understand , you know, some people who help.
Good things can come you know, all over the world.
They are human, our somalian brothers.
interview3
I want to see them and visit them because as somalis they feel lonely,only one man speaks english so if they see us, they might be happy. They are human like us, they can have done some crime but we would like to see them.
Most of them you know they are getting food from the sea
interview4
They say most of the pirates were getting their life stuff in the sea.
So their lifes when they tried to go back to the sea or tried to fish they meet a lot of big ships those who take all of the fish they left for somalis only the small fish that brings no money.
So all fell sory and when they talk to each other and get the idea to be prirates. Thats why they become pirates .
Most of them you know they are getting food from the sea, everything and then this ships a lot of ships pass by. Its a route like highway somalis live in a highway . So they see it like : it is another money from the sea!
Because their is no more fish. When they thry to get fisch they meet a lot of problems like when they take the small boats in the sea, maybe they can not go close to the ship you know.
I remember when i was in somalia in the beach you see dead fisch ,some bad things they through on our sea, so some times you see a lots of dead fish, so they get angry and they talk to each other and they say we become pirates.
Thats why they are pirates but not me , i am a refugee.
If i would be pirate i would have money and i would be alive in somalia. if you have money you dont care about job.
The money they get from ship is a lot of money 4oo dollar each person.much money.
Greetings to the prisonners:
To our brother somali guys in prison in Hamburg:
we hope you to get free
we are greeting you
we are in camp
we can do nothing
we cant suport anything
but we hope you are succesfull with your cause
Somalis in Germany
marily@busyshadows.org
Eingestellt von busyshadows um 09:07 Keine Kommentare: